Are You Ready For The World Cup! 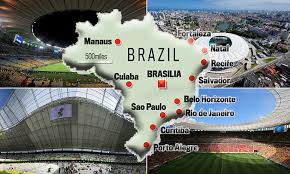 The FIFA World Cup 2014 will be held in Brazil and World Cup 2014 Tickets are now on sale. It’s just fitting to hold it in Brazil which has the winningest team in the football history. But there’s more to Brazil than football. Don’t say that to them or you’re going to be in big trouble. Kidding aside, Brazil is such a very colorful country and it never runs out of festivals. Everything you expect from exciting and amazing carnivals is only given its fullest meaning in Brazil. Nobody celebrates like the Brazilians. You’re going to get the best time of your life.

And June and July may seem far away yet but play it safe and buy your World Cup 2014 tickets and while you’re at it book your flights and accommodations now from Bella Travel while it’s still available.

You will have to deal with the scalpers if you’re going to keep postponing obtaining tickets for yourself. The World Cup 2014 tickets went on sale last August 20 at 7 am Brazilian time. Fans who want to take advantage of the tickets can buy them until October 10. That’d be barely 7 days from now. Remember that the Brazilian fans are given the first priority so get it now. On the opening day when the tickets went on sale more than 2.3 million tickets were requested by 400, 000 fans. So what are you waiting for?

There are two methods of delivering the tickets. One is you pick them up from distribution centers or if you want it, they’re going to be delivered directly to you. No not only in Brazil, but anywhere you happen to be in the world. Do not forget that you can’t use your ticket if you’re not in Brazil. And you won’t be comfortable if you don’t have a hotel. Reserve both using Bella travel a Brazil based travel agency which will take care of your needs right where the action is going to happen. Nobody can do it better than Bella Travel.

Remember Brazil is a regular destination point of tourists every year. Not all who are going there are going to watch the world cup. Many of these old timers have their own destinations to go. Though some of them will want to buy World Cup 2014 tickets and watch the biggest sporting event in the world many of them will go on with their regular schedules going sightseeing and attending the famous dance carnivals. Brazil will draw millions of visitors and concerns about housing all of them will be a big challenge.

Order those World Cup 2014 tickets now and get them from authorized dealers only.

And contact Bella Travel while hotel vacancies are still available. They have also close connections with pension houses, bed and breakfasts, and private families taking in visitors, motels and whatever places where you can stay in comfort and style safe and cozy. And a reminder from Bella Travel, keep your World Cup 2014 tickets in a safe place where you can easily find them. And don’t forget to bring them when you come over. Did you order already?

Do not wait for unexpected. Pack peace of mind! Pack Travel Insurance!

In registering and/or using Bella Travel on line, you and your third party associations are agreeing to the rules and regulations outlined in the "Agreement".

Peace of mind for your travel

We understand you may have questions about your upcoming travel. We’re working around the clock to care for you on your travel journey.

To provide you with more flexibility and control Airlines have waived change fees for certain dates of travel from now until December 2020. Call us to rebook your next flights without penalties before your original travel dates. Passengers who purchase their tickets for international flights between March 2020 and April 2020, change their flights without paying any penalties until September 2020.